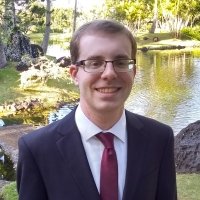 Q: Describe your background and what brought you to the Wilson Center.

I am a Ph.D. candidate in the history department at the Ohio State University. I have previously interned at the State Department in Estonia and have studied the history of Russia, the United States, and Native American and Alaska Native histories, focusing mainly on political and economic history. What brought me to the Wilson Center is its excellent focus in the study of Russia and the many resources that the Wilson Center could offer for my project. Given the many scholars studying Russian-US relations, the Wilson Center was a great place to work on my research about a place that has been under both Russian and American rule.

Q: What project are you working on at the Center?

I am writing my dissertation on the history of the tsarist empire and the American empire in Lingít Aaní (the land of the Tlingit) in what is now Sitka, Alaska. My project covers from around 1820, when the Russian-American Company was primarily administered by the Russian Navy, to around 1884, when American military rule of the region ended. During my time at the Center, I have been specifically researching the labor history of the tsarist occupation of Sitka, especially during the 1850s. One key question for this part of my research has been to what degree was the tsarist empire relying on Tlingit labor for newly emerging industries in Sitka, like the ice industry or the timber industry. In addition, I have been studying the trading relationship between the Sheet’ká Ḵwáan (a political unit of the Tlingit) and the Russian-American Company around Sitka in the 1830s.

Q: How did you become interested in your current research topic?

I have always been interested in the history of the United States and the Russian empire, so it seemed appropriate to investigate the place where these histories intersected. Really though, my interest in this topic came from a general interest in Alaska Native languages, which are still spoken and studied today. It prompted me to consider how the history of Alaska Natives has often been left out in histories of Alaska.

Q: Why do you believe that your research matters to a wider audience?

If there are three ideas that people could learn from my research, they would hopefully be – first, that the Tlingit were historical actors who impacted the attitudes and policies of Russian and American colonizers. Second, that there were major continuities between Russian and American rule, and lastly, that Lingít Aaní (most of southeast Alaska) is still the land of Tlingit. Colonialism is ongoing. Over the past two centuries, the occupation of Sheet’ká (Sitka) changed, but it still was and still IS an occupation. We now see this with disputes over fishing rights in Sitka Sound and the roadless rule in the Tongass National Forest. When the Russian Empire “sold” Alaska to the United States, they received money for land they did not control or own. This legal fiction was used to deny land rights to Alaska Natives for over a century. While my research does not discuss this “transfer,” I hope my detailed examination of the history of Sitka further contributes to the acknowledgment of Sitka as the land of the Sheet’ká Ḵwáan and more broadly as Lingít Aaní.

Q: What is the most challenging aspect of your research?

It has been balancing the many different fields in which I am engaging. Studying a place historically between many empires (British, Russian, American) is quite difficult. It has required some familiarity with subjects as wide ranging as the Hudson’s Bay Company, to fur traders from Tyumen, to Tlingit subsistence patterns around Sheet’ká, to the history of individual American business partners in San Francisco. Add in sources in Russian, Tlingit, German, and Swedish, and it has been a quite expansive project, that is yet considered simultaneously obscure. Still, I really enjoy it, and it is nice to be able to study such a vast array of different sources and subjects. It is hard to ever get bored of it!

Q: What do you hope the impact of your research will be?

In addition to what I mentioned above, I hope my research can contribute broadly to our understanding of Russian, American, and Tlingit history and our understandings of empires. I also hope it will emphasize the importance of Indigenous rights both in Russia and the United States. That said, I guess I do not consider research as the most impactful pursuit in my life. Our world is facing so many challenges right now from climate change, to the growing threat of authoritarianism, to rising inequality. We all must do what we can to address these crises. So, pick something you are passionate about and chip in, with time, resources, or your voice. If my research can spur just one person to get involved, I think it is worth it.

The opinions expressed in this article are those solely of the authors and do not reflect the views of the Kennan Institute.